Voluntary recognition of a union as the exclusive bargaining representative for employees within an identified bargaining unit of the employer can have potentially game-changing consequences for an employer. However, if the National Labor Relations Board (NLRB or Board) agrees to adopt the position of its General Counsel in a brief filed on April 11th in Cemex Construction Materials Pacific, LLC, No. 28-CA-230115., the landscape regarding union representation of employees in the workplace will change dramatically. It will become much easier for unions to organize and more difficult for employers to insist upon a private ballot election. Employees also will lose the right to vote in a private ballot election in many situations.

Background on Right to Voluntary Recognition of Union

For nearly 50 years, employers have not had to accept union authorization cards as conclusive evidence that the majority of their employees actually support unionization. Instead, employers have had a choice. Depending on their assessment of the workforce and the union seeking to represent the employees, employers have had the right to recognize the union on a voluntary basis. Employers also have been able to insist upon a private ballot election as a test of whether its employees actually support the union, and as a precondition to negotiating with a union as the bargaining representative of those employees.

That employer's truly voluntary choice—which has worked relatively well for the past half century—now could change. The General Counsel of the NLRB has advocated in a recent brief that the Board should return to what is known as the Joy Silk doctrine. This doctrine held that an employer must accept authorization cards as evidence of majority support for the union, absent a good faith doubt as to the majority status of the union or the legitimacy of the cards. Joy Silk Mills, Inc., 85 NLRB 1263, 1264 (1949), modified and enforced, Joy Silk Mills, Inc., v. NLRB, 185 F.2d 732 (D.C. Cir. 1950). What legitimately constitutes "good faith doubt" is something the Board would decide. 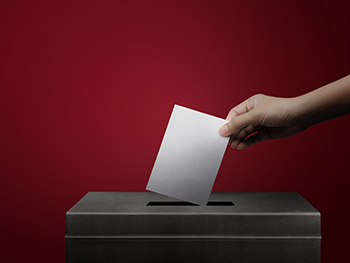 Since its inception in 1935, one of the hallmarks of national labor law has been the right of employees to decide in a secret ballot election whether they wish to be represented by a union. The secret ballot election is designed to allow each employee to vote anonymously and privately on  whether to accept union representation. During the election, a representative from the Board is present to oversee and ensure—to the extent possible —that the election is conducted free from both employer and union interference. In Linden Lumber Div., Summer & Co. v. NLRB., 419 U.S. 301, 95 S. Ct. 429, 42 L. Ed. 2d 465 (1974), the Supreme Court recognized that the Board's adoption of this standard (reserving the right to demand an election) was a reasonable and appropriate interpretation by the Board of employer rights under the National Labor Relations Act (NLRA).

The private ballot election process is included in Section 9 of the NLRA and is designed to allow employees to exercise their individual right to accept or reject union representation, consistent with their Section 7 rights. Any election is preceded by a brief period of time which has grown shorter over the years (now typically 2-4 weeks), in which employers and unions attempt to sway voters into their respective camps. Some unions do not like the election process because support often erodes over the campaign period, as both sides present points and counter-points on the benefits and disadvantages of unionization.

The Right to Voluntary Recognition

A secret ballot election never has been the only pathway to establishing a bargaining relationship between the union and the employer. The decision to recognize a union is significant because once a bargaining relationship is established, the union becomes the employees' exclusive representative for purposes of negotiating terms and conditions of employment. An employer always has the option of accepting majority support claims by a union based upon signed authorization cards from the employees.

In addition to the election mechanics of the NLRA and voluntary recognition, an employer committing severe unfair labor practices during a union-organizing campaign could find itself subject to what is known as a "Gissel" bargaining order. NLRB v. Gissel Packing Co., 395 U.S. 575, 89 (1969). Such a bargaining order would be a remedy for an employer's repeated and severe unfair labor practices during a union organizing campaign. The Board has utilized the Gissel bargaining order to address skullduggery by an employer during the election process, where actions were sufficiently severe to prevent a fair election.

The right of employees and employers alike to insist on a secret ballot election could be jeopardized if the NLRB adopts the position of its General Counsel in Cemex Construction Materials Pacific. Adoption of the General Counsel's position in Cemex and the revitalization of Joy Silk would mean that employers would have to show some objective basis demonstrating good faith doubt of the majority status of the union or the authenticity of the cards presented to it. The brief of the General Counsel also states that under Joy Silk, the employer's unfair labor practices will, in most cases in their opinion, suffice to demonstrate the employer's lack of good faith doubt of the union's majority and would thus result in a bargaining order.

Skullduggery is not the exclusive province of employers, as unions often are accused of obtaining authorization cards in less than transparent circumstances. Sometimes – in the context of unfair labor practices – unions have been accused of obtaining the cards by coercion or misrepresentation, or in other circumstances suggesting the cards may not represent the employees' actual position on union representation.

If the NLRB adopts the position of its General Counsel and the case survives the inevitable appeals, the landscape regarding union representation of employees in the workplace will change dramatically. It will become easier for unions to organize and more difficult for employers to insist upon a private ballot election. Employees also will lose the right to vote in a private ballot election in many situations. Employers should pay significant attention as Cemex Construction Materials Pacific winds its way through the Board's adjudicatory process.  The General Counsel's position deserves close scrutiny and debate as to whether it is good for national labor policy.