On December 14, 2017, the National Labor Relations Board (Board) overruled the standard for joint employment set forth in Browning-Ferris and returned to longstanding, prior principles governing the determination of joint-employer status. With a new majority, the Board held “joint-employer status shall once again require proof that putative joint employer entities have exercised joint control over essential employment terms (rather than merely having “reserved” the right to exercise control); the control must be “direct and immediate” (rather than indirect), and joint-employer status will not result from control that is “limited and routine.”  The Board made clear it intended to align the determination of joint-employer status with the holdings of numerous federal and state courts. Although finding Browning-Ferris well-intentioned, the Board identified five fundamental flaws that warranted reversal. The Board’s decision is being widely viewed as a victory for employers as it removes ambiguities related to control and clarifies the standard for determining joint employment.

The decision, Hy-Brand Industrial Contractors, Ltd. and Brandt Const. Co., focused on two entities—Hy-Brand Industrial Contractors, Ltd. (Hy-Brand) and Brandt Construction Co. (Brandt). Five Hy-Brand employees and two Brandt employees were discharged after they engaged in work stoppages involving wages, benefits, and workplace safety. The Board agreed that the work stoppages constituted protected concerted activity under Section 7 of the Act, and the discharges constituted unlawful interference with the exercise of protected rights in violation of Section 8(a)(1) of the Act.  The Board also agreed that Hy-Brand and Brandt were joint employers, but the Board took the opportunity to revisit the legal standard applied in Browning-Ferris and overrule it.

The Board found in Hy-Brand that the Browning-Ferris majority was driven by a desire to ensure that collective bargaining was not foreclosed by business relationships that allegedly deny employees the right to bargain with employers that share control over essential terms and conditions of their employment.  Specifically, the Board focused on five fundamental flaws: 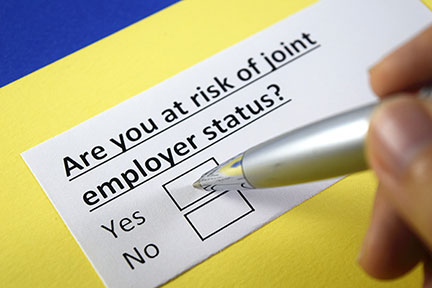 First, that the Browning-Ferris test exceeded the Board’s statutory authority. Specifically, the Browning-Ferris majority relied on theories of “economic realities” and “statutory purpose” that extended the definitions of “employee” and “employer” far beyond the common law limits that Congress and the Supreme Court have stated must apply.

Second, the Browning-Ferris majority’s rationale for overhauling the Act’s definition of “employer”—i.e., to protect bargaining from limitations resulting from the absence of third parties that indirectly affect employment-related issues—relied in substantial part on the notion that present conditions are unique to our modern economy and represent a radical departure from simpler times when labor negotiations were unaffected by the direct employer’s commercial dealings with other entities.  However, the Board was quick to point out that such an economy has not existed for over 200 years.

Third, courts have afforded the Board deference in this context merely as to its drawing of factual distinctions when applying the common law agency standard. The Board’s fundamental disagreement with the Browning-Ferris test was not that it treats indicia of indirect, and even potential, control to be probative of joint employer status, but that it makes such indicia potentially dispositive without any evidence of direct control in even a single area. Under the common law, the Board found that evidence of indirect control or contractually-reserved authority is probative only to the extent that it supplements and reinforces evidence of direct control.

Fourth, Browning-Ferris abandoned a longstanding test that provided certainty and predictability, replacing it with a vague and ill-defined standard that would have resulted in the imposition of unprecedented bargaining obligations on multiple entities in a wide variety of business relationships, based solely on a never-exercised right to exercise “indirect” control over what the Board later decides is an “essential” employment term, to be determined in litigation on a case-by-case basis. Thus, the Browning-Ferris test deprived employees, unions, and employers of certainty and predictability regarding the identity of the “employer”.

Under Hy-Brand and Brandt, the Board effectively clarified the main issue of “control”. By reversing the standard set forth in Browning-Ferris, the Board has stated clearly a company must have direct control of key employment decisions, such as hiring, firing, pay and work assignments when determining if joint employer liability exists. However, employers should continue to review their contractual agreements with staffing companies and business partners to assess the practical reality of supervising staff in order to determine if a joint employment situation may exist under the Hy-Brand standard.