On March 22, 2022, the New York City Commission on Human Rights issued guidance on the Law which states that the Law applies to employers with four or more employees or one or more domestic workers, with at least one such employee working in New York City. The guidance instructs that an individual employer counts towards the four-employee threshold, as do all employees, regardless of their work location. The Law extends to many types of workers, including "full or part-time employees, interns, domestic workers, independent contractors, or any other category of worker protected by the NYCHRL."

An "advertisement" under the Law is defined as a "written description of an available job, promotion, or transfer opportunity that is publicized to a pool of potential applicants. Such advertisements are covered regardless of the medium in which they are disseminated. Covered listings include postings on internal bulletin boards, internet advertisements, printed flyers distributed at job fairs, and newspaper advertisements." The guidance asserts that the Law applies to job positions "that can or will be performed, in whole or in part, in New York City, whether from an office, in the field, or remotely from the employee's home." Notably, the Law does not prohibit employers from hiring without using an advertisement or require employers to create an advertisement in order to hire. 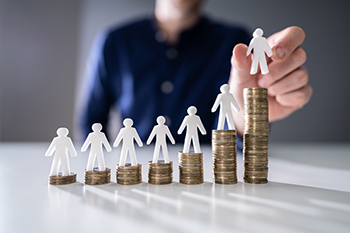 Under the Law, the term "salary" includes the base wage or rate of pay, regardless of the frequency of payment, which the employer in good faith believes it is willing to pay for the job position. Employers must state the minimum and maximum salary for the position, and the range provided cannot be open-ended. For example, "$15 per hour and up" or "maximum $50,000 per year" are inconsistent with the Law. If an employer does not have flexibility in the salary they are offering, the minimum and maximum salary may be identical (i.e., $20 per hour, or $70,000 per year). The term "salary" does not include other forms of compensation or benefits offered with a job listing, such as insurance, paid or unpaid time off work, retirement or savings funds, severance pay, overtime pay, other forms of compensation like commissions, tips, bonuses, stock, or the value of employer-provided meals or lodging.

The Commission on Human Rights will accept and investigate complaints of employees subjected to a violation of this Law. The Law Enforcement Bureau can also initiate its own investigation based on testing or tips. Employers found in violation of this Law may be subject to monetary damages to affected employees and civil penalties of up to $250,000. Employers may also be required to amend advertisements and postings, create or update policies, conduct training, provide notice of rights to employees or applicants, and engage in other forms of affirmative relief.

In addition, the amended bill restricts a cause of action to claims by employees against their current employer for violation of the Law regarding an advertisement for a job, promotion, or transfer opportunity with such employer. Lastly, the amended bill does not impose a monetary penalty against an employer who violated the Law for the first time, if the employer is able to prove, within 30 days of service of the complaint, that the violation has been cured.