Most employers are familiar with the Americans with Disabilities Act (ADA) and its requirement  to provide reasonable accommodations to qualified individuals with disabilities. There is less certainty about the extent of this obligation. For example, what if no reasonable accommodation could eliminate the danger—the "direct threat"—the individual poses in the workplace?

This was the scenario U.S. Steel confronted after it extended a conditional offer of employment to a job candidate to work as a Utility Person. Utility personnel are known as safety sensitive laborers, as these employees drive forklifts, work with power tools and torches, and work with or in the vicinity of hazardous chemicals and molten metal. 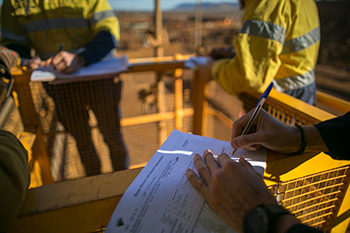 Following the conditional job offer, plaintiff was sent for a fitness-for-duty exam. During this process, the employer learned that plaintiff had a history of seizures and that he had stopped taking anti-seizure medication against his physician’s advice. While he had only had four seizures in his lifetime, there was no guarantee there would not be another one. Ultimately, the employer determined that plaintiff posed a direct threat to himself and those in the workplace, and his conditional offer of employment was rescinded.

Plaintiff challenged the employer’s finding that he posed a direct threat in the workplace by filing a lawsuit for disability discrimination in the Northern District Court of Indiana against U.S. Steel. Ultimately, the district court granted a motion for summary judgment filed by U.S. Steel, and the Seventh Circuit affirmed. In doing so, the court identified what an employer must prove to establish a "direct threat" defense. Specifically, the employer must conduct an individualized assessment of the person’s ability to safely perform the essential job functions. Key factors in the analysis are (1) the duration of the risk; (2) the nature and severity of the potential harm; (3) the likelihood that the potential harm will occur; and (4) the imminence of the potential harm.

In its individualized assessment, U.S. Steel reviewed applicable DOT regulations, plaintiff’s completed health inventory form, a physical examination, and plaintiff’s medical records and neurologist’s notes. This assessment led to the conclusion that plaintiff’s disorder was not well controlled. Furthermore, instead of being of a limited duration, plaintiff’s disorder was of an indefinite nature. Given the safety-sensitive nature of the position, U.S. Steel concluded that the nature and severity of the potential harm would be disastrous as it was found that plaintiff’s seizures could cause him to lose consciousness. Likewise, the fact that plaintiff’s seizures were uncontrolled and of unlimited duration established the likelihood of potential harm. With respect to the last factor, the imminence of potential harm, this was a closer question as plaintiff only had four seizures in his lifetime. However, two of those episodes came after he stopped taking medication, supporting a finding that he was now at a higher risk of having a seizure. Weighing all these factors, the court concluded that U.S. Steel’s decision to rescind his job offer—because he constituted a threat to himself and others—was proper.

This case provides a useful road map for employers to make their own direct threat determinations. Paramount to the process is an individualized analysis of the applicant’s ability to safely do their job. A medical examination of the applicant along with the consideration of relevant medical records is crucial when weighing the four direct threat factors. Employers must document everything that is done to evaluate the employee, his/her present ability, the requirements of the job, and the likelihood and probability of the harm that could occur in the workplace. Additionally, employers should keep the applicant apprised of the analysis, seeking his/her input, while continuing to recognize that the direct threat analysis and decision remains at all times with the employer. See, Pontinen v. U.S. Steel Corp., 18-cv-232 (7th Cir. Feb. 11, 2022).